General
663
3
previous article
Caught On Tape: Feuding Neighbor Fatally Shoots Family's Dog
next article
MC Shan Calls out KRS One to A Battle Once And For All

Recently the Universal Zulu Nation introduced a ‘Peace Code’ system of conflict resolution and violence prevention amongst schools, community centers, mosques, churches, and detention centers in Milwaukee, Chicago, Gary, New York, Detroit, Indianapolis and Oakland. It is now spreading to many cities and urban areas within the United States. As we speak, this system of the Universal Zulu Nation ‘Peace’ code is being adapted by many as a practical technique to save the lives of millions of children nation wide. Since the Universal Zulu Nation has chapters world wide this ‘Peace Code’ system has now been adapted and modified to save the lives of children from the ‘slums’ of Brazil to the shanty-towns of Jamaica and Africa.

The Universal Zulu Nation has recruited teachers, mentors and youth advocates in many cities who are not only using Hip Hop as an educational tool but are mobilizing impoverished communities to become proactive and find solution strategies to the multitude of problems. The Universal Zulu Nation which stands as a vanguard and protector of Hip Hop culture sees children as not just off spring but the next generation of solution builders. Afrika Bambaataa has always taught that the children are to be protected and taught the correct sciences of life. He is a living example himself by his lifelong drug, liquor, and crime abstinence.

Unfortunately, this tactic of defamation and assassination of character is not new and always seems to take ‘center stage’ over more critical issues that face our community. Certain websites and stations will promote lies, slander and rumors to increase ratings and views. Many agents of negativity still focus more time on attacking and slandering humans than they do attacking the major problems our youth face. All energy and attention is shifted from real issues to almost ‘soap opera’ like stories. We now can turn on a television set and watch shows titled ‘Love And Hip Hop’ which have nothing to do with Love or Hip Hop.

In addition, many celebrities and public figures have been publicly crucified by the media for years. There have been so many names we won’t even go into detail cause the list is too long to name. However, what is more alarming is how easy it is in today’s social media networks to influence the masses with pure negativity/gossip and how easy it is for people to believe every and anything without facts, evidence and proper research. Every holy book describes these people as ‘devils’ of chaos spreading slander, lies and rumors of war. The Universal Zulu Nation intelligence is keeping strong data on all these ‘negative’ characters and already has a legal team assembled with strong evidence against these so called human beings involved with this negativity.

In recent news there has been waves of attacks directed at any one who is trying to make a meaningful positive change. Especially those people who have becoming icons and using their power and influence over the masses for good. One thing is for certain in the laws of in the laws of magnetism—opposites attract so ‘positivity’ attracts ‘negativity.’ When you start or have been doing good works of humanity expect a ‘backlash.’ I say this to say that all members of the Universal Zulu Nation doing good works — carry on!

One individual who has become a poster child for lies and slander is named Ronald Savage. He has tried to place himself in history by associating himself with Afrika Bambaataa (Amen Ra of Hip Hop Culture) founder of the Zulu Nation. The problem is that he has chose to pursue the lower path of rumors and character assassination. He has recently written a book which details fictitious accounts which don’t add up chronologically and which place him as a victim.

Mr. Ronald Savage (judicial delegate in the 12th district in Bronx, NY and former NYS democratic committeeman) in his book claims Bambaataa ‘molested’ him while he was 13 or 14 in the late 1970’s in the Bronx. This same individual states he didn’t know he was being molested and that it took him until his 50’s while he was writing this book to come out with these ‘stories.’ In a questionable interview with Star of Shot 97 Mr. Savage claims he can not remember how long these occurrences took place. Furthermore, by his own admission a lot of memory of these incidents was ‘blacked out’ because he did not want to remember. Then all of a sudden the memories came back to him when he was a writing a ‘book.’

By all accounts Mr. Savage please stop lying to the public and openly apologize to Afrika Bambaataa/Universal Zulu Nation and all children world wide. Not only have you disrespected morally, spiritually and emotionally but there are now serious legal issues that come into play as well. The Universal Zulu Nation works with victims of child and sexual abuse and takes these allegations extremely serious. Many of us are parents and ‘children’ are the most sacred members of any community. Abuse is a real issue in our society and for Mr. Savage to use this as a selling point in his book is parasitic and insensitive to all the true childhood victims of abuse. That is why Mr. Savage owes not only Bambaataa/Zulu Nation an apology but all children who have been victims of abuse.

The signed letter (in two pages), as distributed by Universal Zulu Nation’s UK chapter, is also available to be viewed below: 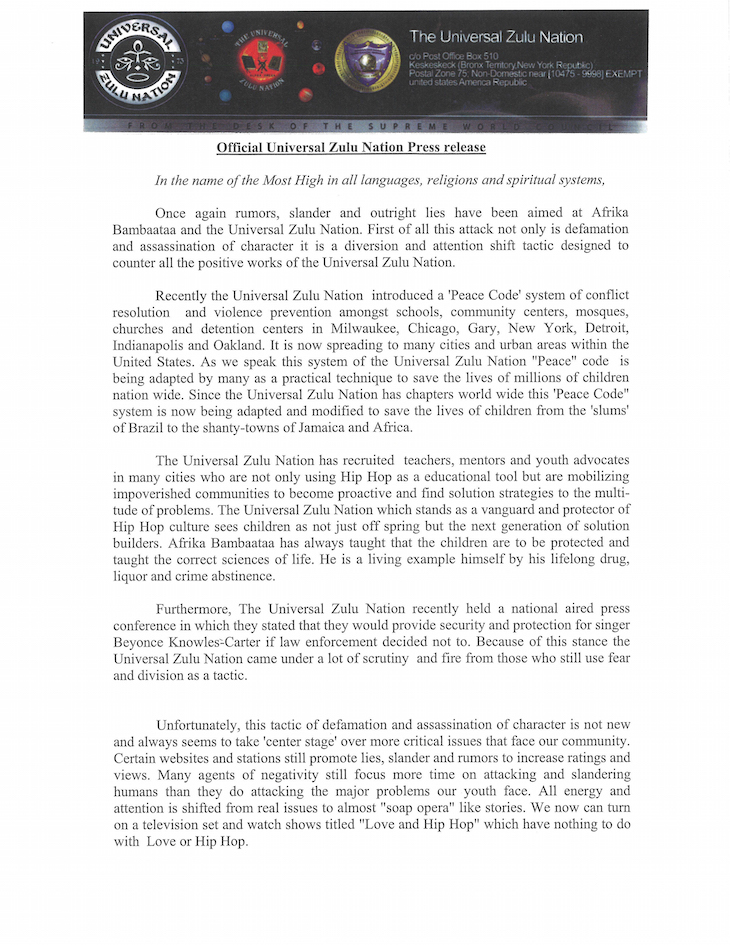 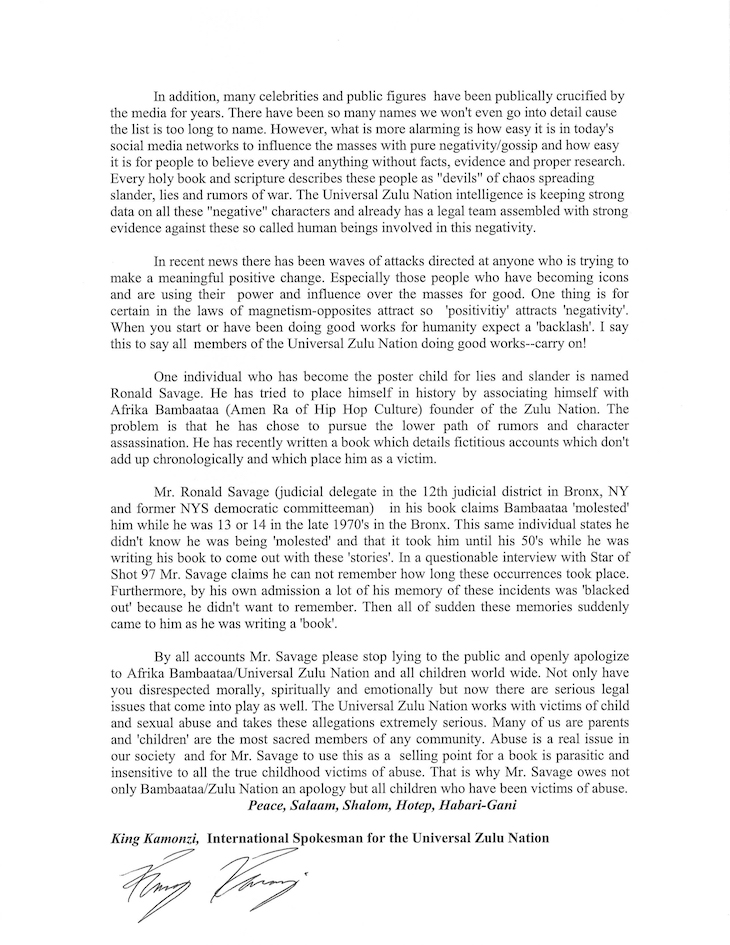 The Real Reason Why People Backed Off The Afrika Bambaataa Story!

Many people ask me what ever happened with the Afrika Bambaataa story, so i’ll give you [...]

Ron Savage: Someone Connected To KRS One Had His Penis Out With Afrika Bambaataa

Ron Savage: Someone Connected To KRS One Had His Penis Out With Afrika Bambaataa (Full [...]

From Ron Save Youtube Page: Ronald Savage on phone with Mr. Biggs from Soulsonic and Smithy one [...]

The Dimples On Her Cake Don’t Bother Me [Pics]

Been A While Since I Posted Many Bad Chicks [Pics]